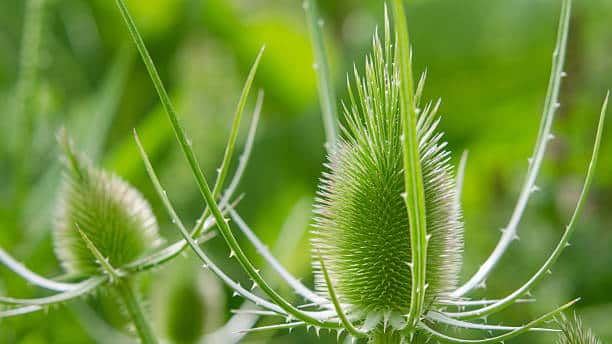 Plants from the family Dipsacaceae have been used for centuries in phytotherapeutic practices (based on herbal medicine) of folk medicine in Central and Eastern Europe. We can read about the beneficial properties of bristles in herbariums from the sixteenth century. Rich descriptions tell about the use of common bristles (Dipsacus fullonum) as a drug to combat pain in diseases such as rheumatoid arthritis and gout. Plant species from the Dipsacaceae family have also been used in folk medicine in the treatment of metabolic diseases and bacterial and viral infections of the respiratory system. Folk remedies from bristles were also used to treat skin lesions with an infectious basis (bacterial infections of the skin). The results of numerous modern scientific studies confirm the therapeutic potential of these plants. The tests indicate anti-inflammatory, bone-strengthening, antibacterial, cardioprotective and anti-cancer properties. The best studied species of the bristle family is Dipsacus asperoides, due to its use in conventional East Asian medicine. This raw material is given to patients to strengthen bones1. 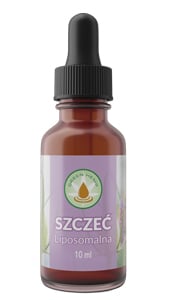 Dipsacus fullonum L. is a flowering plant, commonly known by names such as bristles and wild bristles. The herb of bristles reaches from 1 to 2.5 meters in height. It is characterized by a prickly stem and downward-pointing prickly leaves. The common puppy blooms in the season from July to August. Its flower head has a conical shape. The flowers of this plant are small and purple, pollinated by insects. D. fullonum extracts show promising activity in research conducted in the context of the treatment of many diseases, such as fibromyalgia (a functional pain disorder), bone fractures, bone decalcification, cancer and Alzheimer’s disease. The tests also indicate the antibacterial and anti-inflammatory effects of the phytoactive compounds contained in this plant1,2.

In extracts prepared from common bristles, therapeutic polyphenolic compounds with a dominant part classified as flavonoids (apigenins, quercetins, kaempferol) were identified. Among the flavonoid fraction, bioactive luteolin was detected, among others. Currently, the use of this flavonoid focuses primarily on its ability to protect nerve cells. The properties of luteolin can be helpful in the treatment of senile dementia, as well as memory and concentration problems. The substance also has anti-inflammatory and antioxidant effects. Phenolic acids (e.g. p-coumaric, p-hydroxybenzoic, isopherulic acid, ferulic acid) and iridoids (seroside)3,4 were also detected in extracts from the common bristle. Characteristic compounds for the bristle family, present in the common bristle, are triterpene saponosides, occurring in the form of free oleanoic and ursolic acid, or aglycones of hederagen or oleanoic acid. These substances have expectorant, diuretic and anti-inflammatory effects. They can also positively affect cholesterol levels.

Studies of the phytochemical composition of various parts of the common bristles indicate that the roots of this plant contain more iridoids than its leaves. Iridoids are compounds with antibacterial and antifungal properties. The extract from the leaves of the common bristles, on the other hand, has a stronger antioxidant activity2.

Extracts from the roots of the common bristles have shown in tests the ability to combat Borrelia burgdorferi spirochetes that cause the dangerous disease Lyme disease. In vitro laboratory tests have also confirmed the bactericidal properties of bristle extracts against a wide range of microorganisms, including Escherichia coli and Staphylococcus aureus (Staphylococcus aureus ). D. fullonum also has antifungal properties against Candida albicans shown in scientific tests. However, it is worth remembering that the therapeutic effect of bristles is a good support for the body’s natural defenses, however, it is not able to replace antibiotics in acute bacterial infections1,2.

Chinese scientists have isolated the polysaccharide WRDAP-1, made up of glucose, mannose, galactose, rhamnose and arabinose, from the roots of the dipsacus asperoides species. The study of the properties of this molecule included the determination of antioxidant activity to determine whether this polysaccharide could effectively protect the kidneys from damage associated with oxidative stress. The study of the properties of the polysaccharide WRDAP-1 was carried out using model animals such as laboratory rats. Tests showed that administration of WRDAP-1 from bristles reduced the level of biomarkers of oxidative stress in all three tested doses of 50, 100 and 200 mg/kg. The beneficial effect was particularly noticeable at the highest dose of 200 mg/kg. Based on the obtained results, the authors of the paper conclude that Dipsacus asperoides polysaccharide isolated from the bristle root may become a promising therapeutic agent reducing oxidative stress and positively affecting kidney function5.

The root of bristles (Dipsaci radix) is used in Eastern medicine as a bone strengthening therapeutics. Studies were also carried out to check whether this raw material has beneficial activity in the treatment of rheumatoid arthritis. The tests were conducted on DBA/1 mice caused by collagen type II (CII). Animal health was monitored by checking the concentration of inflammatory mediators in the blood serum. Mice in the study group were given oral aqueous bristles root extract daily. The tests lasted 21 days and the animals received a dose of extract of 50mg/kg or 100 mg/kg. In mice taking bristles root extract, a decrease in the level of antibodies and inflammatory mediators was observed. Using the HPLC (High-performance liquid chromatography) analytical method, the main chemical component in the extract under study was identified. It was asperosaponin VI, probably responsible for the beneficial properties of bristles root extract for joints. The authors of the study claim that the obtained results clearly indicate the anti-inflammatory and anti-arthritic effects of Dipsacus asperoides1 root extract.

Animal studies have also confirmed the strengthening effect against the bone tissue of the saponin fraction of the bristle root. To this end, tests were conducted on female rats whose ovaries were removed to map the osteoporosis developing after menopause. Animals in the study group were given oral ethanol bristles root extract at a dose of 50, 100 or 200 mg/kg/day. The condition of the femur of the subjects was controlled using X-ray absorptiometry, measurement of biochemical markers and a three-point bending test. In the test, the researchers finally showed that the saponin fraction found in the bristle root used at doses of 100 mg and 200 mg/kg/day significantly reduced the decrease in bone mineral density. This therapy also strengthened the biomechanical strength of bones6.

Another substance that attracts the attention of scientists contained in the bristles of Dipsacus asper is isolated from the root of asperosaponin X. Scientists conducted a study in which they proved its cardioprotective properties. This effect was confirmed in tests in which the model animals were rats with artificially induced aortic obstruction. Individuals who were given intravenous asperosaponin aqueous solution had a much smaller area of tissue affected by hypoxia-related changes. Probably the main mechanism of action of asperosaponin X is based on the weakening of hypoxia-induced cytotoxicity, as well as the blocking of the pro-inflammatory factor TNF-α. This activity consequently protected the inefficient heart muscle cells from further damage. According to researchers from the team conducting the experiment, administration of asperosaponin X immediately after the diagnosis of a coronary event is associated with a reduction in the degree of cardiac ischemia7.

Extracts from various species of bristles contain phytoactive substances with significant therapeutic potential. There is currently a lot of research going on on potential drugs containing these chemicals. The results of the tests are very promising, however, preparations based on bristles should not be used as substitutes for conventional therapy assigned by the doctor. These preparations can be used prophylactically to protect the organs of the body from the disease state. Such supplements should also be used as additional support in the course of treatment recommended by a specialist.